crickets in the field . . .
we still hear grandma calling
us home for dinner
Honourable Mention
Tokutomi Haiku Contest 2020
Posted by Debbie Strange at 11:00 am No comments:

The Helping Hand Haiku Anthology (Including Senryu, Tanka, and Haiga), 2020

Editor: Robert Epstein
summer fair
our dog retrieves
a lost boy
Mariposa #40, 2019
I bandage
my sister's wounds
with rose petals,
crooning our mantra . . .
all will soon be well
Red Lights, 15.1, 2019 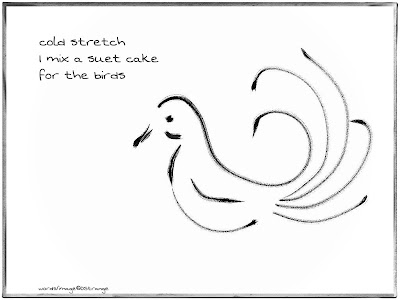 (note: this haiku originally appeared in The Poetry Pea Journal of Haiku and Senryu, Spring 2020) 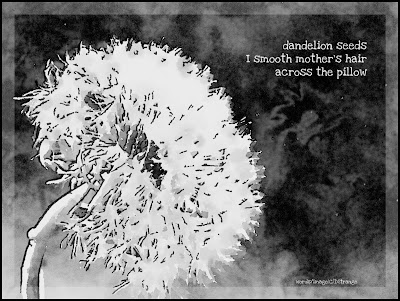 (note: this haiku was selected for the 2019 Yamadera Basho Haiku Contest) 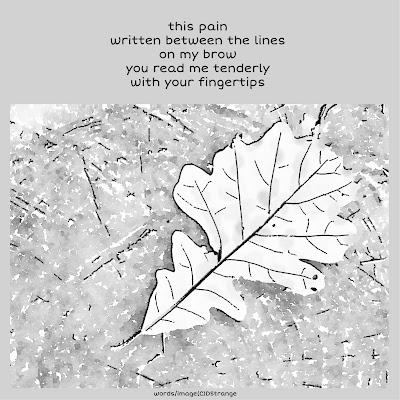 Seashores - An International Journal to Share the Spirit of Haiku, Vol. 5, November 2020

My thanks to Gilles Fabre for his congratulatory message in this issue. The following haiku was short-listed for the 2019 Touchstone Award for Individual Haiku (first published in Seashores, Issue 2, April 2019):
bioluminescence
I skip a pebble across
the universe
**
not yet
the white of snow . . .
tundra hare
ditch flowers
this year I will learn
their names
woodcock moon
the first snow will fall
tomorrow
Posted by Debbie Strange at 10:38 am No comments:

harlequin
the bruises behind
your mask
Posted by Debbie Strange at 10:18 am No comments:

canyon fog
this invisible rift
between us
Posted by Debbie Strange at 10:13 am No comments:

(w)age equity
minnows dart
between our fingers . . .
summer fling
I stand
beneath a canopy
of white,
the span of my hands
against an aspen's heart
Posted by Debbie Strange at 10:10 am No comments:

My thanks to Charlotte for featuring three sets from The Language of Loss: Haiku & Tanka Conversations (Sable Books 2020), winner of the 2019 International Women's Haiku Book Contest:
rainbows
spin from the crest
of a wave . . .
I wish we'd had more
time to say goodbye
feathers
on the empty beach
I write his name
**
a star tortoise
carries the universe
on its back . . .
are we slowly moving
away from each other
dark matter
we never plan
to be alone
**
ancient graves
sink into marshland . . .
the long bones
of our ancestors
wandering, still
hollyhocks
our parents grow smaller
every year
Posted by Debbie Strange at 10:03 am No comments: 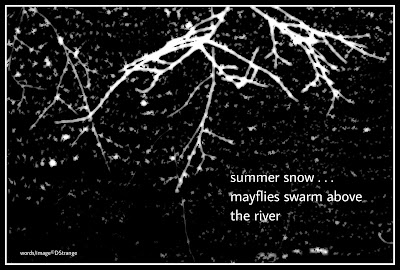 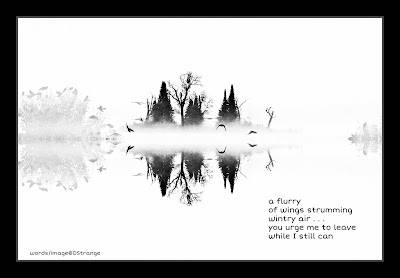 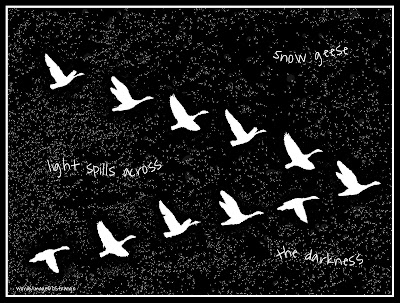 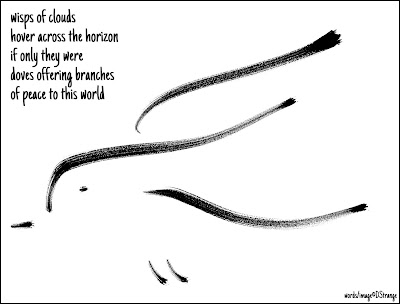 Posted by Debbie Strange at 2:37 pm No comments:

Cool Announcement: A Freebie, Prairie Interludes by Debbie Strange
My Dear Friends:
The award-winning e-book of haiku, Prairie Interludes, written by NeverEnding Story contributor, Debbie Strange, is now available to read free online
Selected Haiku:
a wet spring
dark furrows seeded
with stars
boundary lines
every fence post topped
with a baseball cap
rusted rails
a meadowlark with the sun
in its throat
cloudless sky
a pelican's pouch
full of light
harvesting night
an arc of moondust
from the auger
prize pumpkins
our hayrack buckles
with light
fog weaving
between fence posts
a coyote's song
antelope
the humming of wind
in barbed wire
Posted by Debbie Strange at 12:20 pm No comments:

Translated into Chinese by Chen-ou Liu:
the ocean
was in a rage last night
but today,
these peace offerings
of blue mussels and kelp
1st Place
2018 Sanford Goldstein International Tanka Contest
Chen-ou Liu's Comments: (excerpted from commentary by judges Jessica Malone Latham and Neal Whitman)
The word "rage" has a long, storied history in literature. It is a universal emotion and, for sure, people have long experienced the rage of the ocean. How excellent we thought was its use in line two, rather than using a word such as "storm." We admired the use of a simple comma at the end of line three to give the reader a short pause to allow a moment to ponder, "What's next?" Ah, there is a resolution to the last night. Today? A peace offering to which we felt an "aah" moment. How welcome is the bounty. The ocean offers an infinity of treasures. We found the blue mussels and kelp to be a delightful choice made by this poet. We have already mentioned reciting tanka aloud to take in their sound. You might not choose to read out loud all nine of the awarded tanka, but this one, in particular, lends itself to deeper appreciation with its pivot at the end of line three. You might experience tranquility with lines four and five. We did...
Posted by Debbie Strange at 12:13 pm No comments:

Thrilled to provide the cover and interior butterfly photos for this issue! My thanks to Mike Montreuil for the invitation.
Cover 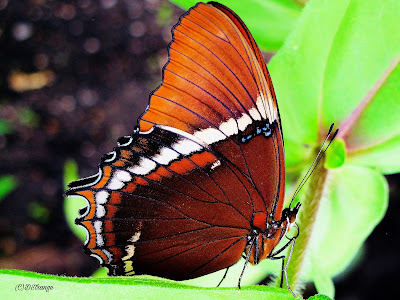 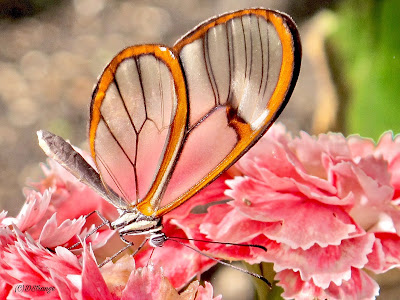 watermarks
paint the canyon walls . . .
my chanting
reverberates until
I am one with sound
by and by
I promise to tell you
everything
but for now, let us listen . . .
nature is speaking
Editor's Choice
It's strictly coincidence that two of my Editor's Choice selections are written by Canadians. This one, by Debbie Strange, drew me in with its musical 'by and by' followed by a hint that she might be ready to share a secret. Who can resist reading further?
Each line is a coherent thought or phrase and slips easily into the following line without confusion. The form is fairly traditional, with its s/l/s/l/l/ sound and appearance on the page ... and that works well for me. I also like the human element combined with nature.
The change of direction when we arrive at the mid-line comma works well. We discover we're not going to hear 'everything'; instead, we have to listen. I doubt that readers will expect what's to come in line 5, but what a delightful surprise with which to conclude this engaging tanka.
I suspect some people would say punctuation is not needed. Technically, maybe it isn't. However, I find the comma and ellipsis slow me down, give me time to be still, become calm, and to open my ears and really listen.
—Susan Constable
Haiku Section 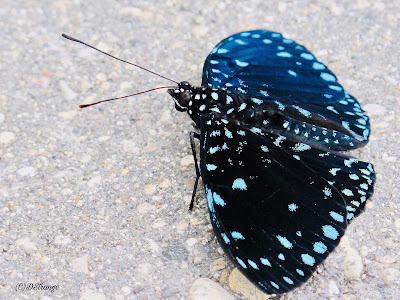 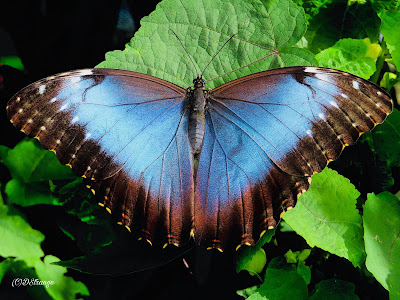 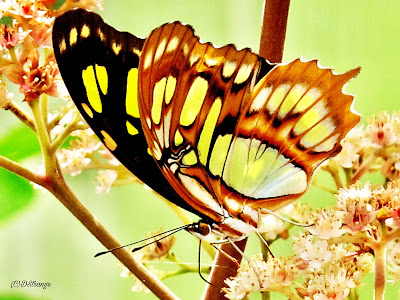 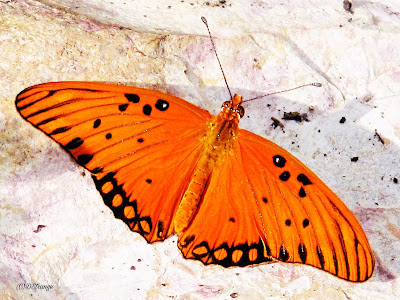 The following haiga was also included in this issue: 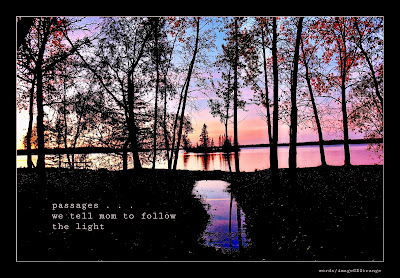 Posted by Debbie Strange at 10:27 am No comments: 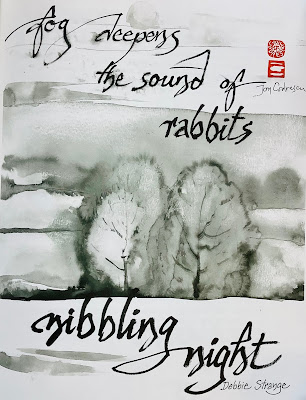 A thousand thanks to Ion for this evocative haiga!
I was surprised and grateful to have fellow Canadian poet, Michael Dudley, choose the following haiku as a favourite, and I thank him for his generous and sensitive reading of my work:
atlas moth
the places I thought
we'd go
Honourable Mention
2017 Jane Reichhold International Prize
"In the particular is contained the universal." James Joyce
Within this precise, concise, deftly expressed haiku by Debbie Strange, a quiet voice of recognition and resignation conveys a gracious though bewildered acceptance of time passed and opportunities lost. The exact possible life destinations/discoveries/experiences that the persona and another/others have not shared; judiciously, the poem does not explain the reason/s for such unfulfillment. Thus, each reader may enter the details of the poem personally, inspired by the words to revisit and contemplate similar circumstances from his/her own life. The particulars included within the poem and the details left out seamlessly evoke a universal theme.
—Michael Dudley
I chose the following haiku by an'ya as a favourite:
birth death
this stretch of beach
between
Daily Haiga, December 2009
I'm a lifelong beach rambler, so this melancholic haiku resonates with me on many levels, and can be interpreted both literally and metaphorically. I've always been intrigued by what the tides leave behind (birth), and what they take away (death). The physical space between the words "birth" and "death" reminds me of the dash often etched between dates on a tombstone. The word "beach" is a perfect metaphor for "life", and with only seven words, this gifted poet invites me to take a reflective walk through my past into my future.
—Debbie Strange

Posted by Debbie Strange at 9:49 am No comments: 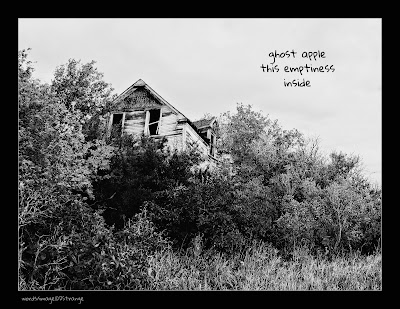 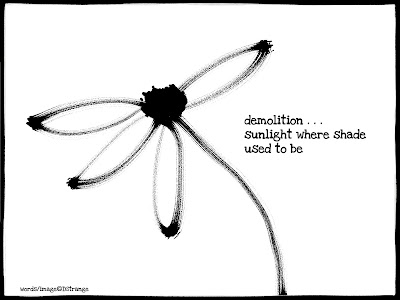 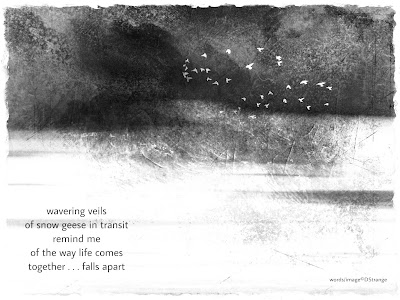 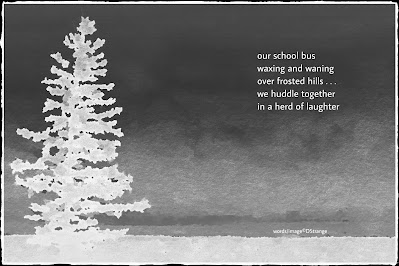 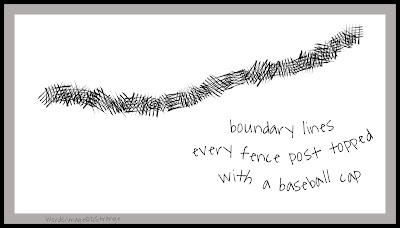 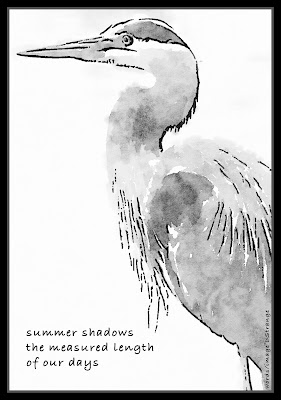 Posted by Debbie Strange at 11:09 am No comments:

farm road
a tiger lily fills
with dust
Posted by Debbie Strange at 10:48 am No comments:

Issues 36 - 47, 2017 - 2019
#38
dandelion—
every bee flecked
with light
#39
bone density—
the broken stems
of sunflowers
charred trees
the horizon wider
today
#40
woodland trail
we inhale the breath
of old trees
heavy traffic
a queue of ladybugs
on a twig
#42
ancient stones
the orange moons
of lichen
#43
harvesting night
an arc of moondust
from the auger
#44
windblown seeds
refugees try to cross
the border
Posted by Debbie Strange at 10:27 am No comments:

The Haiku Pea Podcast
Series 3, Episode 20 - "Found Poetry", October 19, 2020
storm-clouds
I spread out my joy
on the grass
culled from: "New Rain", The One & the Many by Rabindranath Tagore
Posted by Debbie Strange at 11:16 am No comments:

The Haiku Pea Podcast
Series 3, Episode 18 - "Loss", September 21, 2020
circles of lichen
I thought we would have
more time
3rd Place
2018 Kaji Aso Studio Haiku Contest
winter jasmine
we inhale the scent
of dying stars
Posted by Debbie Strange at 11:13 am No comments:

Issue: "i heard it first"
the aurora
pulses overhead
like a heartbeat
in these dark times
light knows how
to lift me up
Posted by Debbie Strange at 11:02 am No comments:

Email ThisBlogThis!Share to TwitterShare to FacebookShare to Pinterest
Labels: cherita, The Cherita 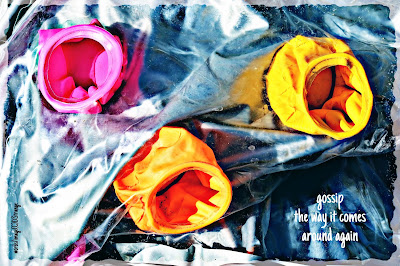 Posted by Debbie Strange at 10:55 am No comments: 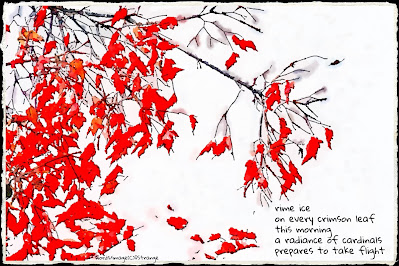 Note: this tanka was first published in GUSTS 31, Spring/Summer 2020
Posted by Debbie Strange at 10:24 am No comments:

squirrel-proof
we buy a bird feeder
that isn't
Zatsuei Haiku of Merit
Shintai Category
sequestered
I cultivate the seeds
of loneliness
Editor's Choice Haiku
Hon. Mention, Vanguard Category
Comments:
This is an interesting way of handling loneliness caused by the pandemic. All the secrets are contained in line 2. The interpretation of the words 'cultivate' and 'seeds' decides the author's response. She is not yet suffering from the fully-blown loneliness but clearly expecting it is coming. In that case, it would certainly be better to 'grow' it in the way she likes or tolerates, rather than leaving it to grow by itself out of her control, making her life an utter misery. There is 'good' loneliness and 'bad' loneliness. The word 'cultivate' seems to me to be giving such implications.
—Susumu Takiguchi
Posted by Debbie Strange at 10:16 am No comments:

The Haiku Foundation, Per Diem, September 2020

Selected by Susan Burch for the theme of "Mental Health/Illness": September 9, 2020
split chrysalis
all the ways we learn
to become small
Museum of Haiku Literature Award
Selected from Blithe Spirit 25.4, 2015
Posted by Debbie Strange at 10:01 am No comments: