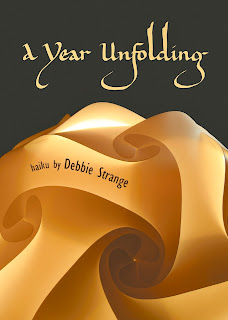 R E V I E W S
A Year Unfolding - Review by Charlotte Digregorio (editor and author) on Goodreads, November 8, 2020:
This book offers sensitive poems that inspire the reader to observe nature in fresh ways and unfold its mysteries. Each haiku is presented in artful calligraphy that is illustrative of the sentiments behind the poems. I recommend that poets of all levels read this collection to learn from the author about expressing themselves with simplicity and elegance. It's also a rich imagistic volume to gift that will be treasured and re-read for years to come.
__________________________________________________

A Year Unfolding is a surefooted collection of 30 of Debbie Strange's haiku ranging across various insights and aiming to observe the poet's habitat and the changing seasons in Canada. The haiku are presented in calligraphy by JS Graustein.

The otherness Debbie Strange observes everywhere while turning over thoughts in her mind, leads her to take a good look at nature. Indeed, in the book's opening haiku, the poet connects the white of the lily of the valley with the changes, both in nature and perhaps in herself:

white bells
ringing the changes
lily of the valley

Animated by what she views around her and her intimacy with nature, the poet in her "muddy jeans", sees "the pasture speckled / with crocuses". Spirituality is linked with nature in the following haiku:

another egg
in the falcon's nest
rising moon

In this beautifully realised series of haiku born out of Strange's engagement with the change of seasons in Canada - "mountain lupines / the colour of wild / in your eyes" - the fragmentary allows the speaker to gain a foothold on her surroundings: "lake-light / a line of mergansers / ripples the clouds", and we admire her looking and thinking rigorously about something seemingly as inconsequential as "in the hills / cattle lowing between / silences". The landscape described may seem uninhabited, but the poet's steady gaze enlivens it for us. Strange is lucky enough to capture nature so convincingly, but she also appreciates domesticity. She sees connections and possibilities which other people might miss:

Strange is the perfect guide for showing us how to connect with our own surroundings. She possesses the skill for using simple language to describe concepts or phenomena with great taste and self-effacement, as well as with a highly original imagination. Her poems seem to come 'of a kind' though this does not mean they lack variety, but that their focus is on the personal. The deep, quietly moving exploration of place, mood and fragility are, at their finest, unique additions to haiku. It's in this understanding that Strange's poetry earths itself.


A Year Unfolding - Review by ai li, editor of the cherita: your storybook journal, on Amazon (United Kingdom), October 15, 2017:


I first encountered the poetry of Debbie Strange through her tanka in Atlas Poetica, A Journal of World Tanka, which I found entrancing. A Year Unfolding now allows me to explore how she expresses her love of nature through the haiku form.


on the beach
I collect the broken shell
of myself

Debbie's vulnerability is completely accessible to us in this haiku and she is unafraid to share this with her reader.

duskfall
we trail our fingers
through stars

Here the author brings lyricism into what is a quiet and personal moment in time.

You will read this book and you will want to discover more of Debbie's short form poetry.