Honoured that Pearl Pirie mentioned my work in her September 6, 2021 review of A New Resonance 12 (Red Moon Press 2021) - Jim Kacian and Julie Warther, Editors:
Debbie Strange has a painterly picture (p. 164) that is fresh-seeing.
alpenglow
a pika gathers stems
of light
We know that moment where the highlights are blown into pure light even without eyes, in a backlit autumn field. I appreciate the specificity of pika, as if a rebuttal to the argument that only common nouns that are the theoretical construct of "universal" serve haiku.
Posted by Debbie Strange at 10:15 am No comments:

Honoured that Dave Read mentioned my work in his February 26, 2021 review of Dance into the World, the 2020 Tanka Society of America Members' Anthology - Michael Dylan Welch, Editor:
Similarly, many of the tanka about the pandemic in "Garden of Dwindling Petals" shine:
sprites flash
across purpling skies
for a moment
I forget the grim state
of this locked-down life
Strange's tanka, on the other hand, is about a moment of distraction. However, that moment is brief. Even in watching the "sprites flash / across purpling skies", the narrator is not far from her awareness of the pandemic. The poem's force hinges on the word "grim" which jettisons the reader back to the reality of "this locked-down life".
Posted by Debbie Strange at 10:01 am No comments:

Honoured that Sandra Stephenson mentioned my work in her February 17, 2021 review of the Wales Haiku Journal, Winter 2019-2020 - Paul Chambers, Editor:
Of the poems, open and totally accessible with a good-sized serif typeface, many are note-worthy, Canadian Debbie Strange's egg that didn't open caught my eye...
the egg
that didn't open . . .
waning moon
Posted by Debbie Strange at 9:49 am No comments:

Honoured to have the following concrete tanka selected as 1 of 12 finalists (longlisted from 406 entries) in this "contest without winners"! My thanks to the judging panel for their selection and insightful comments below... 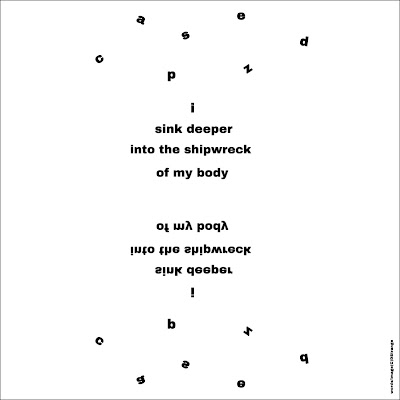 Comments from the Judging Panel:
Chrissi Villa: This tanka is not only visually compelling, with the jumbled arrangement of the letters of "capsized" and the upside-down reflection of the words of the whole poem, but is also poetically poignant.
Shloka Shankar: I recently read a poem by Jim Harrison titled 'Becoming,' and the opening lines, for me, truly encapsulate the emotions underlying this brilliantly crafted concrete tanka:
Nowhere is it the same place as yesterday.
None of us is the same person as yesterday.
We finally die from the exhaustion of becoming.
We all have to face the inevitable uphill battle of growing old and frailer as the years pass us by. The visual potency of this poem, seen as a mirror image, is somehow magnified, staring us straight in the face. What particularly struck me was L2: the "i" in lowercase is almost a depiction of helplessness, the image of being lost at sea, without any kind on anchor.
On the other hand, there is a quiet sense of acceptance that pervades this poem, making it all the more appealing and relatable.
Julie Bloss Kelsey: Strange's visual poem about the loss of health evokes a boat, with scattered letters over the surface of the water implying deeper problems lurking just beneath the waves. The placement of the letters in "capsized" - with "i" in the center - brings to mind a spinning vortex. This is reflected in the rest of the text - "sink deeper into the shipwreck of my body." The repetition of the vortex, both visually and conceptually, effectively implies that the subject of the poem is also falling deeper into depression over their situation. Expertly crafted.
Alan Summers: The use of I on its own line has me thinking of times when 'we' as an individual capsize, and the "i" is reduced by circumstances, and social pressure. Of course, health is always an issue, and sometimes it's not merely physical and physiological, but affected by external issues such as politics, war and famine, poverty, intimidation, and other circumstances beyond our control. The "i" needs to stand on its own line, as we must never lose sight of ourselves despite extraordinary times and peer pressure.
Interview with me:
What inspired the poem?
This tanka was inspired by my experience with chronic illness and the resultant physical and emotional trauma.
What was your process for writing it?
My daily writing practice helps me to shift focus away from the things I cannot control to the things I can! I keep a file of words and fragments that spark my imagination and interest. The word "capsized" was the driving force behind this poem.
What other forms, formats, or iterations did you consider, and why do you think the poem had to be written this way?
The first iteration of this tanka was written in the traditional five-line s/l/s/l/l form. Its final version emerged as a concrete poem because I wished to express the sentiment in a more dynamic manner. The scattered letters symbolize the feeling of being overwhelmed. Use of a lowercase "i" serves to emphasize loss and the myriad ways in which the marginalized and disabled are often made to feel small. The reflected letters are a metaphor for drowning.
How to you think the poem helps to push the boundaries of, or contributes to, the genre?
Invisible disability is often misunderstood, much like tanka, so the dialogue between these two subjects comes quite naturally. Debates surrounding the definition of these topics continue to evolve, and I'm excited to lend my voice to the ongoing conversation!
Posted by Debbie Strange at 9:35 am No comments: 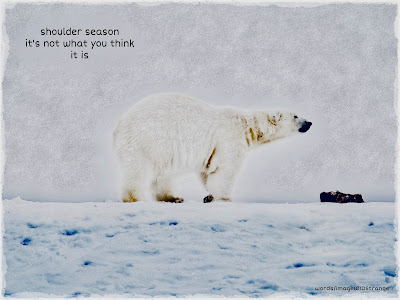 bomb squad another robot bleeds to death
fractured identity he slips in and our of her mind
tent caterpillars
this jumble of roads
leading nowhere
we wrap
our arms around
each other . . .
sun dogs embrace
the ice-splintered sky
in silence
she crochets by the fire
lacy snowflakes
drift softer than breath
onto her apron
Posted by Debbie Strange at 11:30 am No comments:

Translated into Japanese
shepherd's crook
her flock shape-shifts
into clouds
berry-picking
even our shadows
turn blue
skating pond
the unopened lotus
beneath us
Note: these haiku previously appeared in Akitsu Quarterly 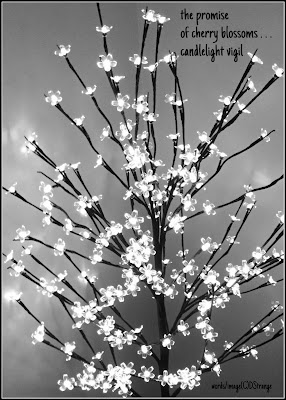 Posted by Debbie Strange at 11:24 am No comments:

Whiptail: Journal of the Single-line Poem - Into Oneness, Issue 3, May 2022 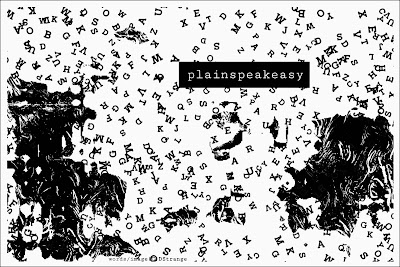 Posted by Debbie Strange at 11:20 am No comments:

Email ThisBlogThis!Share to TwitterShare to FacebookShare to Pinterest
Labels: haiga, one line, Whiptail

ebb tide the overnight appearance of new w(r)inkles
spring snow
a red fox pounces into
another dimension
first wellies
an alphabet of earthworms
on the sidewalk
Posted by Debbie Strange at 11:14 am No comments:

seaside fireworks
the blue heron's grace
goes unnoticed
snowy pine
a nuthatch spirals
into the unknown
Posted by Debbie Strange at 11:11 am No comments:

beaver dam
the new course
of an old river
Posted by Debbie Strange at 11:07 am No comments: 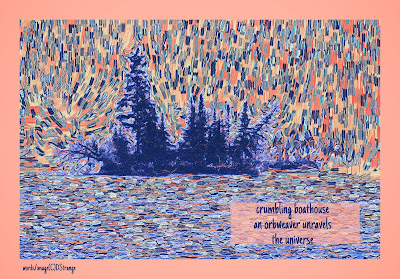 Posted by Debbie Strange at 11:05 am No comments: 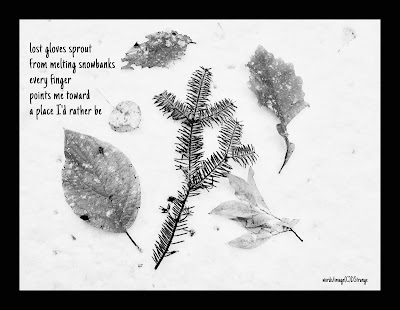 (Note: this tanka received an Honourable Mention in the 2021 Fleeting Words Tanka Competition)
Posted by Debbie Strange at 11:00 am No comments:

black truffles
we search for something
beyond the obvious
the icy glint
of uncertain tracks . . .
tundra sunrise
flood plain
a red barn succumbs
to its reflection
Posted by Debbie Strange at 10:51 am No comments:

a swan
with bumblefoot disease
taking flight . . .
wellsprings of hope
rise inside my breast
leaving home
for the first time
my carpetbag
filled to bursting
with butterflies
someone slept inside
this hollow log last night
blankets of moss
to keep the cold at bay,
a bird's nest for their pillow
Posted by Debbie Strange at 10:46 am No comments:

litterbugs the propagation of human insects
lifeboat
theory
the
disabled
denied
boarding
teen suicide
the lichen-pocked faces
of stone angels
Posted by Debbie Strange at 10:42 am No comments:

My thanks to Kelly Moyer for selecting the following haiga: Posted by Debbie Strange at 10:39 am No comments:

Theme: drinkable haiku
we harvest
a chunk of chaga for tea . . .
vacant bear den
Posted by Debbie Strange at 10:34 am No comments:

A Fine Line: The Magazine of the New Zealand Poetry Society, Autumn 2022

Translated into Bulgarian
My thanks to judges, Radu Serban, Iliyana Stoyanova, and Frank Williams for selecting the following haiku, and to Iliyana Stoyanova and Vessislava Savova for the Bulgarian translation:
Theme: music
estuary light
the treble clefs
of flamingos
2nd Place
Third Maya Lyubenova International Haiku Contest, 2022
Posted by Debbie Strange at 2:29 pm No comments:

Curated by Hazel Borys and the Helix Team
Excerpted from the Winnipeg Free Press, December 30, 2021:
"The Assiniboine River walking trail known as the helix path has returned for a second consecutive year.
The path debuted last winter as a safe space for visitors to get fresh air during the COVID-19 lockdown and now returns for the same reason.
This year's path extends nearly 60 metres and mimics the helix pattern from last year, which was specifically designed to promote social distancing while using the space.
Borys said organizers are planning to add music this year to accompany the return of the path's popular poetry contest and live yoga sessions."
My thanks to Hazel for selecting the following tanka triptych as a poetry winner, which was subsequently frozen into a block of ice and lit with candle lanterns along the Helix Path:
architrave
the shimmer
of diamonds on snow
and water
sometimes we take
small gifts for granted
on Groundhog Day
we speak of shadows
etched on snow
forgetting how we lengthen
into filaments of light
we walk
under laden boughs
into silence
a place of worship,
this architrave of snow
(note: this triptych appears in my full-length collection, Three-Part Harmony: Tanka Verses, published by Keibooks in 2018)
Posted by Debbie Strange at 2:19 pm No comments: