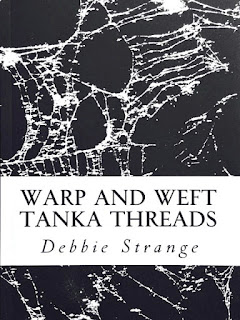 Debbie Strange's Warp and Weft is a feast for the senses. The collection is arranged into 72 triptychs (titled sets of three poems), each linked by a common thread or theme. Although individual tanka have appeared in various publications, the arrangement in this collection enables a deeper appreciation of how the poems within each triptych resonate with each other to create layers of meaning. On almost every page I have tagged tanka that I would like to return to and explore in depth.

Initially, I am attracted to the music and rhythm of the collection. The opening set, "the flute of tides," illustrates this beautifully.

I am drawn into the ebb and flow of these words, their gentle rhythm and the way repeated sounds echo the swirling sounds of the sea. Rich with imagery and steeped in metaphor, the set becomes an allegory for life. The first tanka calls upon the cycles in nature, the relationship between moon and sea, to tell our story. This trickles into the deep, dark rock pools of the second tanka, a metaphor for impermanence. I am particularly struck by the image of starfish as "sea stars clinging to ungranted wishes." Could they mirror the lost potential or the unfulfilled dreams that accumulate throughout life? In the end, both who we are and who we might have been, are scattered with our ashes into the sea. The third tanka in the set centres on the things left behind. Like driftwood along the beach, although worn and windswept through the process of living, the story of each song becomes part of a greater symphony.

In the set titled "the scent of you," there is sad and poignant beauty that lingers.

In the first tanka, the stark image of a dried rose in an empty vase conjures up a powerful metaphor for a life nearing its end. The "untouched bed-tray" implies a sense of resignation or surrender and the "ghost no one visits" suggests the empty shell or lifeless body that remains. This aligns masterfully with the practicalities highlighted in the second tanka. Although initially amusing, this is a deeply intimate and moving tanka. The sad process of sorting through and disposing of a loved one's personal belongings after they have died is a potent reminder of impermanence and our own mortality. In death, material things, even those once considered precious, intimate or essential for survival, are no longer significant. It is not surprising that this tanka received an honourable mention in the 2013 World Tanka Competition. The third tanka in the set is punctuated by a sense of smell. The images of a bridal bouquet and funeral wreath evoke the lingering scent of rosemary, a symbol for remembrance.

In "all the ways to shimmer," we discover the poet's deft eye for detail and her ability to capture in words the beauty of transient moments and everyday things.

The tranquil image of the night sky reflected in the lake is animated by the wake of an otter's trail across the water. The simple addition of the words "and me" in the closing line add a new perspective, where the poet and the otter are one, and the poem becomes a metaphor for life. From here we glide to the top of a ferris wheel to focus on the intricate detail of spider webs, their orbs reflecting the structure they are attached to. We then shift to the microscopic shimmer of stardust on skin. Implicit in this set is the poet's delight in the natural world and her ability to discover so many ways to shine through darkness.

The collection weaves back and forth through nature, life, illness, war, love, relationships and much more. Throughout this rich assortment of themes, the poet's exquisite expression and deft language skills shine through.

This is not only a collection to read but also one to appreciate through all the senses—sights, sounds, tastes, textures and smells are skilfully woven into the fabric of words to create an evocative and enduring experience that lingers long after all the poems have been read. Warp and Weft is a collection I will return to again and again. To this end, I will let Debbie Strange have the final word (from "the singing bowl").

Debbie Strange tells us that Warp and Weft, Tanka Threads is her first collection of tanka and what a fine collection of poems it is. To me, this book is a gift of powerful and rich words that involve us, draw us into a maze of stories that show us how present and mindful the author is in her everyday life.

I have selected five examples that will draw you into Debbie's world of being open whilst being touched by a turbulent world:

WARP AND WEFT TANKA THREADS is a unique presentation insofar as it’s author Debbie Strange from Canada, explains in her Author’s Note in-part:

“Each triptych in this tanka collection contains poems taken from different publications, but sharing a common thread.”

In addition, M. Kei writes from the back cover blurb of this book in-part, as being:

“Primal poetry with a pagan heart” Warp and Weft by Debbie Strange weaves tanka into short threads of three each, each triptych building into larger sequence that tells the story of a poet with a raven’s eye.”

Already I was intrigued and not to be disappointed. Starting with the cover art “A Spider’s Loom” which is by the author herself, and in keeping with her triptych theme. The two that I enjoyed the most mentioned “father and mother”:

and a few more of my favorites for your enjoyment too:

What a riveting book of tanka this is indeed, much to my liking as I am sure it will be to all of those who have the privilege to read it.
—UHTS cattails Tanka Book Reviewer an'ya, USA

‘Warp and Weft, Tanka Threads’ by Debbie Strange is an 86 page long collection of poems seamlessly woven into stunning tanka sequences, leading the reader through the dark, the light & the in-between…
our hands are stained —
children
of war zones
silenced
with no legs to walk
along the path to peace
missing —
now they search
the dump for bodies
hundreds of missing
and murdered Indigenous sisters
whose spirits wait for justice
limned —
a ragged curl
of birch bark fluttering
in the sun
even our smallest wounds
become limned with light
spangled —
she kneels
in the spangled grass
listening deeply
to the opening hymn
of a monarch chrysalis
folding into me —
crossing over
the bridge of sighs
I felt you
folding into me
folding into prayer
falling into flight —
I let go
and your lightness
carries me
beyond the sky
into myself
.
Warp and Weft, Tanka Threads is as exciting as it is ambitious, moving through a narrative of sea wolves & cloudscapes, wild forests & war zones. Speckled with rich imagery, honesty & sophistication Debbie Strange’s tanka story is not just a book, but also an adventure.
it can be purchased at the link below —
http://www.amazon.com/Warp-Weft-Threads-Debbie-Strange/dp/1512361127
___________________________________

Press Release – For Immediate Release – Please post to all appropriate venues
13 September 2015
Primal poetry with a pagan heart, Warp and Weft by Debbie Strange weaves tanka into short threads of three each, each triptych building into a larger sequence that tells the story of a poet with a raven’s eye. Traversing the wilderness of the human heart, Strange’s map is written with quills upon clouds. Each triptych is an incantation to accompany the moments of life and impregnate them with the fecund power of darkness. She is comfortable with night, with ravens, ashes, soil, pain, and the welling blood of an injured heart. But for all the ghosts that glide through her lines, the wind always rises upwards to become clouds and stars.
my hands
tend the wild roses
upon your grave
in blood and blossoms
I sanctify your name
sailing
into midnight
encircled
by stars upon stars
nothing but stars
at the stoplight
she squeegees
car windows
her scrawny arms tattooed
with poetry and addiction
she lies trembling
breast-bare
as he dissects the diagnosis
three daughter moths
flutter in fear’s white blaze
riding pillion
my heart
against your back
we unzip the highway
at the velocity of night
“Debbie Strange’s imagination dwells in the world of elemental forces. In her tanka we encounter fire (“burnt down fields of dreams” and the “sun’s closed fist”), water (“glacier hearts” and “bouquets of wild rain”), earth (“dust of love letters” and “stone sorrows”), and wind (“windswept bone” and a “gypsy wind”). At home with ocean and prairie, desert and city, Strange writes elegantly-crafted triptychs that are lyrical and sensual, and saturated with colour and scent. Strange is a songwriter as well as artist and poet and her tanka are steeped in the music of “fog horns sounding a dirge”, “blues wailing through harmonica bones,” and “the bakeshop café’s a capella harmonies.” The poet also possesses the rare ability to surprise: sand in her “shell mouth” never becomes pearls, and the “ragged scars” on her back are “remnants of that night they tore off my broken wings.” Warp and Weft is a fine and sophisticated debut collection.”
—Angela Leuck, author of A Cicada in the Cosmos and Garden Meditations
“Warp and Weft unfurls like the first bulbs of spring, strong and unquiet, they are “the cleft between mountains” where echoes live. These poems, these tiny bones, small as phalanges, but what would we do without them?”
—Katherena Vermette, author of North End Love Songs, winner of the 2013 Governor General’s Literary Award for Poetry and the 2015 selection for On the Same Page, Manitoba’s Book Club
“Warp and Weft is Debbie Strange’s Leaves of Grass. We have an amazing poet living amongst us. Let us sing her praises.”
—Alexis Rotella, author of Lip Prints, a tanka collection, and Between Waves, haiku
“Canadian poet Debbie Strange’s first collection of short form poetry, Warp and Weft, Tanka Threads, is stunningly beautiful and deeply moving. The titular threads each are three tanka, from the last lines of which a title for the thread is drawn. The arrangement of verses shows the meticulous and discriminating care of an art gallery show. Strange manages to combine gorgeous language with a spare diction. So much is said in a few well-chosen words. These tanka are a pleasure to read and read again. Debbie Strange has emerged as an important voice in tanka poetry.”
—Denis M. Garrison, author of First Winter Rain (tanka) and Hidden River: Haiku and editor of Modern English Tanka, Haiku Harvest, Ambrosia: Journal of Fine Haiku, and others
Warp and Weft, Tanka Threads
by Debbie Strange
Edited by M. Kei
ISBN 978-1512361124 (Print) 94 pp
$12.00 USD (print) or $5.00 USD (Kindle)
Purchase in print at: https://www.createspace.com/5520311
Also available in print and ebook at Amazon.com and other online retailers.
Keibooks
P O Box 516
Perryville, MD 21903 USA