Translated into Chinese by Chen-ou Liu

The contrast of lights (star light vs. reflected light from the sun) between the two parts of this imagistic haiku is visually and emotionally effective. 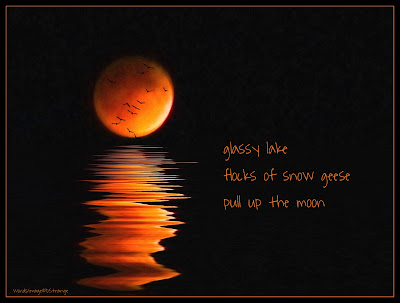 glassy lake
flocks of snow geese
pull up the moon

Commentary by the judge, Bruce Ross:

Many haiku have been written about the effect of moonlight and the moon's reflection. This haiku is unique and highly poetic in its expression.

And the later-added photo successfully turns the haiku into an effective haiga not only heightening the visual focus of the haiku but also lacing itself into the reader's imagination.